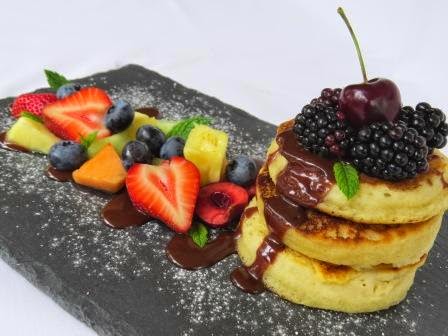 150g flour (white or half white, half wholemeal)

Extra oil for cooking (vegetable or rapeseed is good)

Weigh all of the ingredients direct into one large 2l jug or a bowl and whisk into a smooth batter.

Heat a large frying pan or griddle on a medium to high heat and pour in a little oil to grease. (You can check if hot enough by adding a drop of batter and seeing if it sizzles.)

Pour or spoon the batter onto the hot pan/griddle – to the size you want (usually about 2-3 tbsp of batter mix per pancake).

Cook until you see bubbles rise to the surface, the edges start to brown and the batter has set (about 2-3 minutes) they are then ready to flip.

Use a spatula to carefully turn the pancakes over and cook for another 2 minutes or so. You can take a peak underneath to see if they are brown enough and cooked through.

Best served immediately or you can keep warm in the oven, on low, while you cook some more.

These were served with chocolate sauce and a ‘rainbow’ of fresh fruits! Or why not try fresh apple with caramel sauce, or bananas with nuts and maple syrup. 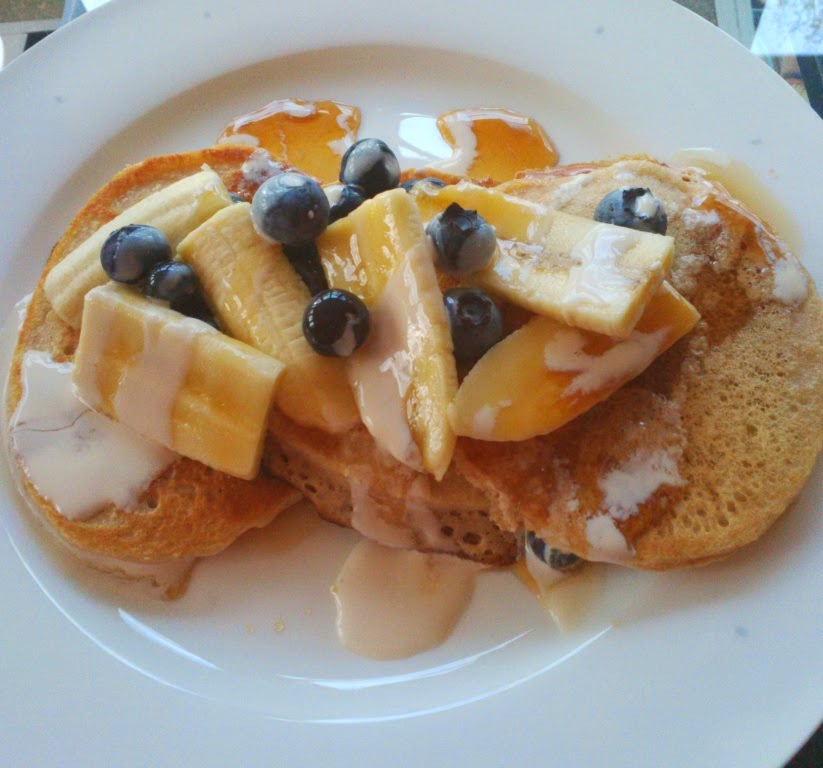 It always makes me smile when I hear people's perception of the Vegan lifestyle - in that it must be very restrictive,boring, bland and basically about deprivation....
Because, as Vegans know - nothing could be further from the truth! And these little beauties are a guaranteed way to start that conversation ;)

Try some this weekend on some people who have that perception and then smile when they ask you.


Prepare the sweet potato and while it’s cooling sift all of the dry ingredients into a large bowl, add the chocolate chips and HALF of the cherries and mix with a fork to combine.

The mixture needs to be of a pouring consistency – add a little more plant milk if it needs it.

Pour into the prepared tray and top randomly with the remaining cherry pieces.

Bake for approx 30 minutes – or until the cake springs back when lightly pressed with your finger. Do not apply the clean skewer test to check this bake as ideally it should not come out clean but still be sticky inside.

Paws for thought... 'Friend or faux?'


Fake, replica, mock, analogue - whatever you call them, faux meat and cheese products seem to be dividing the established Vegan community.

You may like them, you may not and you may have an opinion on them… and here’s mine:


I should just start by saying that this post, in part, has been prompted by a little online incident, of what I can only call ‘purist policing’. If you’re Vegan already you may know what I mean.


Vegans are pretty much used to having their food and lifestyle critisised and questioned by some non-vegans, but what can come as a shock is when Vegans are on the receiving end of it from – other Vegans.

It’s only happened to me a couple of times and each time I’ve bitten my Vegan tongue, risen above it and replied in a positive way. But I observed an incident the other day that has meant I needed to vent a little – so forgive me!

It occurred when a fabulous food blogger I’ve come to know, and greatly admire, tweeted a picture of her shopping trolley. I was delighted because in one graphic it instantly showed a regular household food shop, filled with a wide variety of foods…. This always pleases me because non-vegans undoubtedly have a perception than Vegan living and eating is difficult and that we seem to eat nothing but mung beans and brown rice. Let me tell you – a very good Vegan friend and I only recently discovered what a mung bean was!!! So…


But low and behold, someone (A N Other Vegan – let’s call him ‘PP’) saw fit to critisise the contents of this shop for too many ‘junk’ items, too many replicas and not enough fruit and veg (which actually was more hidden further down the trolley).


Let me be very clear…


This makes me mad…

And as I have pointed out on several occasions – compassionate to the nth degree though I may be –in reality no-one wants to see a redhead get mad… it’s never going to end well.


What upsets me is that if a non vegan had been following this thread and had seen this interaction and seen the criticism… they would be deterred. It doesn’t send a positive message.

But the point for me, about this lady’s trolley, was that she was proving just how easy it is to be vegan and the main thing to focus on was that her trolley contained no dead animals or animal secretions, and surely THIS is THE ONLY point to focus on.

But it links in with some reactions I have seen to faux products – in particular those that are designed to be similar to meat.


I know some purists want us all to be juicing, spiralising, eating raw food and only using fresh ingredients – but this is NOT what Veganism is about to me. If you’re into that then of course that’s fine! Enjoy! And I would never critisise you for eating that way. But to place emphasis on it as necessary in order to be Vegan, and to be scornful of those who don’t, is not only hurtful, it’s alienating to so many people.


In my mind this doesn’t help the Vegan ‘cause’ one little bit.

If your average non-vegan on the street thinks this is how you have to live to be Vegan, then frankly they’re never going to try it and we’ve missed a trick in helping them to change their lives for the better and, of course, to save animal lives. We need to be realistic about what non-vegans currently eat and we need to be pragmatic in our approach to that. Visit any supermarket, observe peoples trolleys and you’ll see what I mean. They are full of convenience foods.

Yes, we all know that our own health is important and we also know that a Vegan diet can help improve this significantly. And in actual fact switching from meat to ‘copies’ of those things – even processed versions, is still far healthier for people. They contain almost zero cholesterol and fewer calories for a start! But making all of your own food, from scratch, is not a prerequisite to being Vegan and most people people lack the time, skills and dedication needed to make this happen.

Another issue that seems to be raised is why would someone want to eat a product that reminds them of a dead animal – why would they want to replicate that?


Here’s my view on it: that product - i.e. a sausage, for example, doesn’t remind me of a dead animal… I don’t think pig or cow when I eat one – because thanks to a psychological barrier called ‘cognitive dissonance’ (basically a mental disconnect) that I had when I was non vegan, I never associated pork or beef sausages with a dead animal either! I didn’t see them as sentient animals on my plate ever! I saw the items simply as ingredients either for a casserole or for my breakfast or with my mash… and it’s simply the same for a plant-based sausage – it really is. It’s just an ingredient that I am familiar cooking with, yet it comes with no violence attached.

AND people like them. It does not mean they’re hankering for the good old meaty days of feasting on animal flesh though, because much of the flavour in any meat-based dish actually comes from the herbs, seasonsing, spices and vegetables that are used with it (think marinades, rubs, sauces and smokey flavours) – not from the meat itself. That’s how it’s so easy to replicate because it’s about a seasoning blend. That’s often what people miss.


So, in my opinion, whatever helps people to come into this wonderful compassionate lifestyle then I’m all for it.
If that’s a readymade pie, a sausage or a burger then so be it – great!

And as people become more aware of their eating, and learn more about food in general, yes they may then venture into the culinary realms of creating great wholesome plant-based dishes from scratch. But until that time let them eat tofurkey and facon in peace!

Allow me to illustrate my point further:


I’m actually quite a good cook and I enjoy cooking. But when my life changed and I wanted to try being vegetarian I was flummoxed as to where to start. However, help was at hand in the form of Quorn, Linda Mccartney and Goodlife products. So OVERNIGHT I was able to make that dietary change, and hey presto, I was instantly killing less animals. I didn’t need to think about it at all – I just did it.

Scarily, I might never have done it if I had thought I would need to buy more ingredients, more equipment and more cook books whilst spending hours in the kitchen and planning my evenings around when to soak my mung beans. My research shows that THIS is how the vast majority of people think.

And now… a couple of years later when my husband (bless him) has decided he really should to learn to cook… how was the best way to approach it? Well, by starting out with meals that he’s familiar with and taking the pressure off in the kitchen by using an ingredient such as soya mince, or a veggie roast or a sausage so that he could ease himself into cooking and learn how to steam broccoli and other veg one step at a time.

And let me tell you he can now make a mean Sunday roast with the best crispy potatoes and perfectly steamed veg because of it. Thank you Vegusto. His confidence has grown and now he wants to learn more and experiment more with cooking things from scratch.


What a great result!

At the end of the day, the vast majority of people are time poor, they lack cooking skills and do not have the inclination to break the habits of a lifetime, particularly for something that appears to be like hard work. It’s just a fact – humans are drawn to the easy option and even if they’re interested in Veganism it won’t take much to dissuade them from trying it. Research I’ve done over the last year has born this out time and time again. And it’s why you’ll see me focus on all of the positive and all of the easy ways in which you can live this amazing cruelty-free life.


If we make something seem difficult, when there is already a negative perception of it, then we are never ever going to change hearts and minds and progress to a kinder world. It just isn’t going to happen.


The fact is that hardly any of us were born and raised Vegan. Most of us have spent years eating animal ‘products’ – it’s what we’re used to and what we know how to use. And indeed our entire food culture is based around these ingtredients. Decades old habits will take decades to change. So to all the PPs out there, please understand, please think before you critisise and remember what Veganism is ultimately about.

And if you disagree… yet you still enjoy an almond ‘milk’ latte, have vitalite on toast, like a good tofu ‘scramble’, eat cake bound with flax ‘egg’, grill ‘burgers’ made with beans, have ‘cheesy’ nooch sprinkles…. Then you may wish to reconsider your faux view. 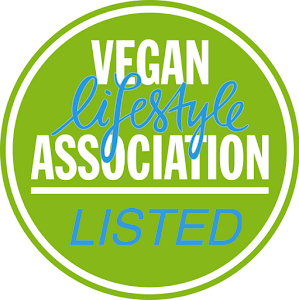 Now you can pin me!

Talk to me at Vegan Chat Room

or send me a little message :)

People are loving these posts:

but here's what else you missed!